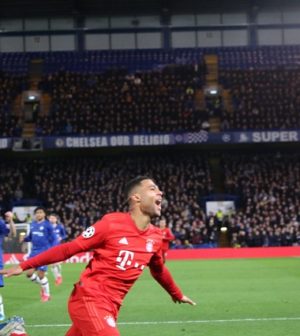 Bayern Munich have all but secured their place in this season’s UEFA Champions League quarter-finals with a dominant 3-0 win away to Chelsea in the first leg of their second round tie.

The German Bundesliga champions had been the better side in a goalless first half before Serge Gnabry scored twice in the first 10 minutes of the second half.

Gnabry’s first capped off a fine move from Bayern Munich which included Robert Lewandowski squaring the ball to his teammate when in a goalscoring position himself.

The former Arsenal youngster doubled the visitors’ lead four minutes later with a left-footed effort past Willy Caballero. Serge Gnabry now has six goals in just two trips to London this season, having scored four in Bayern’s 7-2 demolition of Tottenham Hotspur back in October.

Cabellero had been busy in the first half whilst Chelsea rarely looked like scoring – Mason Mount firing a couple of left-footed efforts off target was as exciting as it got for Frank Lampard’s side.

Robert Lewandowski tapped home from close range 15 minutes from time to essentially seal the deal. The Polish striker was teed up by Alphonso Davies, who made a sublime run down the left wing, beating two challenges.