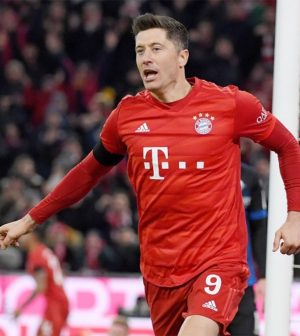 Chelsea and Bayern Munich meet tonight for the first time since the 2012 UEFA Champions League finals.

The English Premier League side upset the odds in winning on penalties to lift the trophy at the Allianz Arena that night.

Frank Lampard’s side would need to spring a monumental upset if they’re to progress from this tie. This evening’s first leg is being played at Stamford Bridge.

Frank Lampard sticks with 38-year-old Willy Caballero between the posts. In front of him will be a back three, and Reece James and Marcos Alonso playing wingback roles.

Olivier Giroud continues to lead the line up front and will be supported by Mason Mount and Ross Barkley for the visit of the German champions.

Hansi Flick has reverted to a back four having tested three centre-backs in Friday night’s late 3-2 win at home to Paderborn in the Bundesliga.

Former Manchester City player Jerome Boateng will partner David Alaba in central defence, as had been the case for much of this season due to injuries.

The pacey Alphonso Davies makes his 20th consecutive start in all competitions and is once again at left-back due to injuries. Expect the Canadian to form an attacking partnership with Serge Gnabry down that flank.

Robert Lewandowski has been scoring for fun this season and will have further supply from both Thiago Alcantara and Thomas Muller in central positions, and Kingsley Coman from down the right wing.