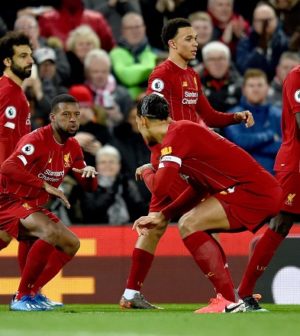 Liverpool took one step closer to the 2019-20 Premier League title with a 3-2 win over West Ham United in an exciting game at Anfield on Monday night.

The Reds have now taken 79 from a possible 81 points in their 27 Premier League games this season, opening a 22-point lead over second place Manchester City, with 11 games to go.

Jürgen Klopp’s side appeared to be on their way to victory when Georginio Wijnaldum produced an excellent header from an excellent Trent Alexander-Arnold cross after only nine minutes.

However, the visitors from East London levelled three minutes later when centre-back Issa Diop headed home from a corner.

Liverpool quickly pressed for an equaliser and got it midway through the second half by way of some fortune. Mohamed Salah’s tame effort from 12 yards managed to sneak through the legs of the anticipating Łukasz Fabiański.

Victory never looked in doubt for the Premier League leaders afterwards and they were on their way 10 minutes from time when Sadio Mané tapped home from Alexander-Arnold’s cross.