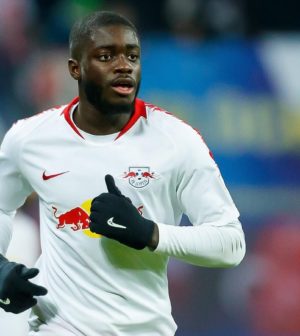 Manchester United have joined Arsenal in the hunt for RB Leipzig centre-back Dayot Upamecano, according to reports via the Mirror.

The 21-year-old has been a regular in the Bundesliga side’s first team ever since he joined from RB Salzburg in January 2017.

Upamecano helped the recently formed German club to reach this season’s Champions League, where they were in the knockout stages and challenging Bayern Munich for the domestic title prior to the COVID-19 epidemic disruption.

The France under-21 international has developed into one of the highest-rated young defenders in Europe over the past three years and is expected to become a regular in the senior national team in the future.

Dayot Upamecano’s form in the middle of Leipzig’s defence has caught the eye of some of England’s top clubs, with Arsenal previously linked with a move to the player last summer.

The Gunners pulled out of any move by the player’s £70 million asking price according to the Mirror, but are now expected to step up their interest with a £52.5 million buy-out clause in his contract that is set to activate over the summer.

Arsenal have been very weak in defence over the past couple of seasons and Mikel Arteta was unable to settle on a centre-back partnership between December and March following his arrival in North London.

The Spanish manager will have William Saliba available to him next season, after the young French defender was signed last summer but sent back on a season-long loan to St Etienne in France’s Ligue 1.

With Dayot Upamecano heading into the final 12 months of his contract at the Red Bull Arena and with no suggestions that he is likely to renew, it is expected that the club will cash in on him.

Another club being strongly linked with the youngster is Manchester United. Ole Gunnar Solskjaer himself is expected to look for a long-term partner to Harry Maguire before the start of next season and may have found his ideal target.

However, Solskjaer and the Red Devils are expected to face stiff competition from the likes of Manchester City, Real Madrid and Bayern Munich, according to the Mirror.

Upamecano has proven himself in both Germany and the Champions League, so would surely be a good acquisition for either Manchester United or Arsenal should they be successful in any approaches for the defender.

We shall have to see how things develop over the coming months as neither the English FA nor German have even decided on the fate of their respective 2019-20 leagues as of yet.