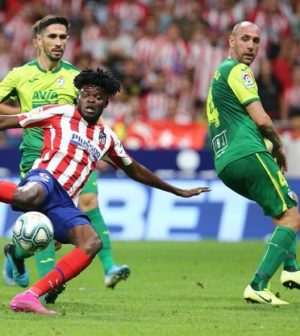 Arsenal have been handed a big boost in their chase of Atletico Madrid midfielder Thomas Partey with the news that the Spanish club are “open to selling every player”.

The Gunners lack a solid holding midfielder with Matteo Guendouzi ill-disciplined in holding his position, Lucas Torreira often used in a more advanced role and Granit Xhaka just not being up for the job.

Mikel Arteta’s side have been linked to Thomas Partey in recent weeks and a transfer for the 26-year-old seems very possible now.

The Ghana international has been on Atletico Madrid’s books since 2012, making 118 La Liga appearances for the capital city’s second club, as well as further appearances in the Champions League.

Partey has been a key component in Diego Simeone’s first team this past season which makes you wonder if the Argentine head coach will do his best to keep hold of him.

However, the central midfielder has a reported £43 million buy-out clause in his contract, with is a very reasonable price for the Gunners to pay.

Respected Italian football journalist Gianluca Di Marzio has now been quoted as saying that every Atleti played is on the transfer market this summer. Di Marzio is quoted by Sky Sports as saying:

“Arsenal want him a lot. Every Atletico Madrid player is in the market.

“So, it depends a lot on the offer. Atletico are open to selling every player if the offer is good.

“It also depends on budget – how much Arsenal can afford? And how much Atletico want?

“Atletico will want money, so it is difficult to see them doing a deal involving other players as part of it.”

However, Gianluca Di Marzio has warned Arsenal fans that he would not be surprised if Atletico Madrid were to retain Thomas Partey beyond this summer’s transfer window, adding:

“They are very smart when it comes to doing deals and it will not be a surprise if Thomas Partey was to stay.

“He is young, he is not like Diego Costa, and they can sell him next year if they want or even in two years time.

“So they are in control.”

Should the reported £43 million buy-out clause be accurate then you can expect Arsenal to have stiff competition for Thomas Partey’s services this summer.