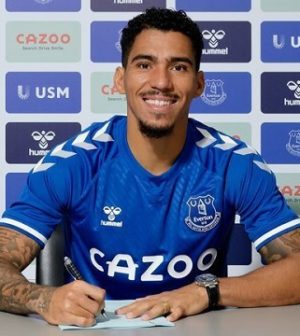 Everton have completed the signing of Brazilian international Allan from Napoli, the club have announced.

No financial details have been released but the Toffees were able to confirm that the 29-year-old has signed a three year deal until the end of June 2023.

Allan had spent the past five years with Napoli, for whom he played under Claudio Ranieri. He spent three years with Udinese directly below, having arrived in Italy from Vasco da Gama in his homeland.

The central midfielder has earned nine caps for the Brazil national team after making his debut in 2018. He was part of Tite’s squad that won the Copa America last year, along with current Everton star Richarlison.

“It is a real pleasure to sign for Everton. I am immensely happy to be here.

“I hope, like I have done in my entire career, I contribute with my performances together with my teammates and that I put in some great games, great performances and win important things.

“It is a club with a rich history in the Premier League, has real ambition and then there is Professor Ancelotti.

“He has done everything possible to bring me here.

“It is the size of the Club and the name of the coach which means you don’t think twice about coming to Everton.”

Allan is an excellent ball winner in the middle of the park and is capable of man marking an attacking midfielder out of the game. He has an abundance of energy.

This is the club’s second confirmed signing of the summer, following the arrival of left-back Niels Nkounkou from Marseille at the start of July.