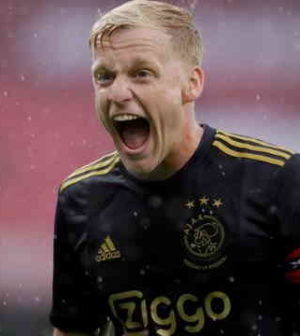 Manchester United have announced the signing of Donny van de Beek from Ajax.

The 23-year-old has signed a five-year deal at Old Trafford with an option to extend a further year.

Van de Beek came through the youth ranks at Ajax for whom he played a key role in their surprise UEFA Champions League run to the semi-finals in 2018-19. He also appeared in the 2017 Europa League final versus us.

He has become a regular in the Dutch national team over the past two years, though is yet to break his duck in 10 caps.

The midfielder is both a playmaker and goalscorer in the middle of the park and works relatively hard off the ball to win it back too.

It will be interesting to see what Ole Gunnar Solskjaer’s formation plan is as the new signing would be an ideal swap for Paul Pogba in their current 4-3-3 formation.

Donny van de Beek may have been brought in to help with squad rotation as it was obvious that the current manager lacked a lot of faith in many of his squad players following the restart.

The likes of Bruno Fernandes and Paul Pogba struggled to get a rest and looked tired in the final weeks, perhaps contributing to their Europa League exit at the hands of Sevilla in the semi-finals.

Although both clubs have not announced the transfer fee involved, several reports including one from the Guardian, suggest that Manchester United have made a coup this summer, understood to be just £35 million.