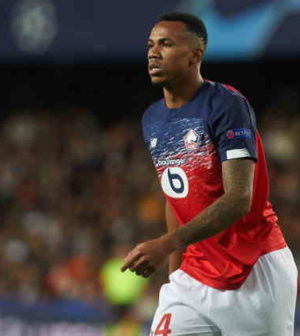 Arsenal have completed the signing of Gabriel Magalhaes from Lille for £27 million.

The centre-back has signed a five-year deal at the Emirates until the end of June 2025.

Gabriel had been strongly linked with a move to the Gunners for several weeks, understood to be facing competition from Manchester City, Manchester United and Napoli, among others.

The Brazilian had actually agreed to join the North London club 10 days ago but had been forced to quarantine since arriving in English capital from France.

Mikel Arteta has made defence his priority this summer, making the loan deals of Pablo Mari and Cedric Soares permanent back in July. They will also have William Saliba back from his season-long loan at Saint Etienne.

Gabriel played in all six of Lille’s Champions League group stage matches last season, in what was his first season as a regular in the French side. He had made only 11 Ligue 1 starts the previous season.

The 22-year-old is good in the air and strong in the tackle. He likes to pass the ball out of defence instead of launching it downfield.

As well as signing three defenders this summer, Arsenal also signed right winger Willian on a free transfer from Chelsea. The Brazilian himself is hardworking off the ball and gets back to defend.

Having won the FA Cup and Community Shield last month, Arsenal look to heading in the right direction under Mikel Arteta and it will be interesting to see if they’re strong enough to challenge for a top four finish this season.