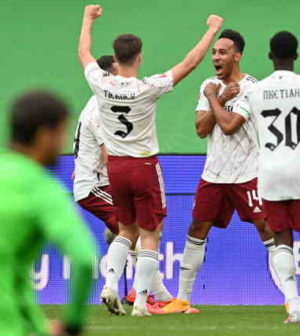 Arsenal have won the 2020 FA Community Shield on penalties over Premier League champions Liverpool after a 1-1 draw at Wembley Stadium on Saturday.

Both clubs played lineups close to their strongest from last season, with Neco Williams starting at right-back for the Reds and Eddie Nketiah up front for Mikel Arteta’s side.

Liverpool had an early goal ruled out from Virgil van Dijk for offside whilst James Milner headed over unmarked from seven yards.

Against the early run of play Arsenal took the lead in the 12th minute on the counter-attack with a fine 18-yard strike from Pierre-Emerick Aubameyang that gave Alisson no chance in goal.

Six minutes later Eddie Nketiah had an excellent chance to double Arsenal’s lead but fired his opportunity too central, allowing the Brazilian goalkeeper to deflect his effort behind for a corner.

Chances were few and far between in the second half but Liverpool drew level in the 73rd minute with a nice passing move and a fortunate deflection of the ball to fall into the path of Takumi Minamino to finish coolly from seven yards.

Em Martinez produced a great save in the final 10 minutes to deny Sadio Mane inside the six-yard box.

The final chance in 90 minutes fell to Joe Willock with five minutes to go, but the Arsenal attacker headed wide from six yards from in front of goal.

Youngster Rhian Brewster, brought on in the final seconds, fired his spot kick off the top of the crossbar as the only taker not to convert his.

Watch the highlights and all the penalties from Arsenal 1-1 Liverpool here: