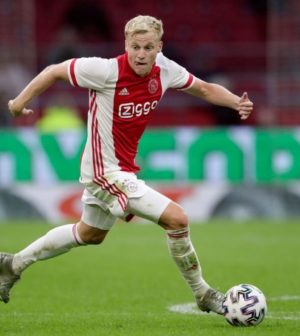 Donny van de Beek has officially completed his move to Old Trafford for an initial fee of £34 million. The Dutchman is a real statement of intent by Ole Gunnar Solskjaer, who’s sought to further the Red Devils’ midfield threat following the acquisition of Bruno Fernandes in January 2020. On paper, we are now stacked with regards to midfield options. So, let’s consider where van de Beek fits into the equation.

More than Just Competition for Places

Along with Fernandes, the 23-year-old will join a squad that includes the likes of Fred, Jesse Lingard, Juan Mata, Nemanja Matic, Paul Pogba, and Scott McTominay. From a numerical standpoint, Solskjaer isn’t short of central options in the middle of the park. That said, few of his existing players provide the same threat as van de Beek.

According to a report by the Metro, the Norwegian manager intends to utilise the Dutchman as a number ten, playing behind a central striker. Interestingly, this is certainly a position that van de Beek could thrive in. As per Transfermarkt, the Nijkerkerveen-born midfielder has played 81 games as an attacking midfielder. In that time, he has scored 26 goals and provided a further 22 assists.

Individually, this offers plenty of encouragement should the Dutchman adopt this role at Old Trafford. However, this may result in the United midfield lacking balance, with Pogba and Fernandes also likely to start. Against deep-block sides, this approach could flourish when needing to break teams down. On the other hand, the system may need adjusting in games where we can expect to see less possession.

If we are to close the gap on Liverpool and Manchester City at the top of the Premier League, then Donny van de Beek is a sensible acquisition. The Red Devils are currently priced at 16/1 in the football betting to win the title come the end of the 2020-21 campaign. Although we aren’t the favorites, this latest signing should help us overcome mid-table sides, which was an issue during the 2019-20 season.

Upon comparing van de Beek with Pogba, it’s clear to see that the 23-year-old will bring something new to our midfield. According to Squawka’s comparison matrix, the Ajax academy graduate boasted a higher ground duel success percentage per 90 minutes than the Frenchman last season. Interestingly, van de Beek’s total came in at 56.85 percent, while Pogba’s sat at 46.73. Crucially, this is encouraging from a pressing standpoint and will allow us to turn defense into attack more rapidly. Furthermore, the Dutchman also recorded a better pass accuracy total than Fernandes.

A Step in the Right Direction

Although Solskjaer may have to tackle the issue of midfield balance, it’s undoubtedly a positive dilemma to have. While there are no guarantees that van de Beek will be the catalyst in taking us back to the title, few can argue that his arrival won’t help to take the Red Devils closer to the top of the Premier League once again…