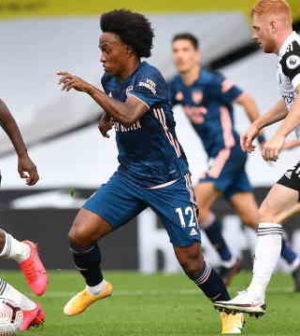 Arsenal made a confident start to the 2020-21 Premier League season with a 3-0 victory away to newly-promoted Fulham on Saturday lunchtime.

Alexandre Lacazette opened the scoring on eight minutes before Gabriel Magalhaes and Pierre-Emerick Aubameyang scored within the first 15 minutes of the restart.

Fulham’s only real threat on goal came in the opening minutes following a defensive mix-up from the visitors which resulted in Bernd Leno denying Aboubakar Kamara one-on-one.

Bernd Leno 7 – Excellent awareness to deny Kamara in the opening minutes and had virtually nothing to do afterwards.

Rob Holding 8 – A solid performance at the right side of defence and may well be a regular for the Gunners this season if Mikel Arteta continues with this formation.

Gabriel 9 – An excellent debut after the first five minutes. Aside from scoring Arsenal’s second the young Brazilian was solid at the back and composed on the ball.

Kieran Tierney 8 – Looked in control defensively throughout the game and played some nice forward passes.

Hector Bellerin 8 – Not greatly threatened at the back and played a couple of nice crosses into the box from out wide.

Mohamed Elneny 7 – Was a little surprising to see Mohamed Elneny in the starting lineup but the Egyptian was disciplined in holding his position and played a sensible, short passing game.

Granit Xhaka 7 – Did his usual in completing a lot of passes and didn’t pick up a yellow card this afternoon. Nothing special but nothing risky from Granit Xhaka either.

Ainsley Maitland-Niles 7 – Showed his versatility by playing out on the left and Fulham never really threatened down his side.

Willian 9 – A superb debut from the Brazilian, who assisted two goals and was involved in the opener too. In between Wililan found time to hit the outside of the post from a free kick too.