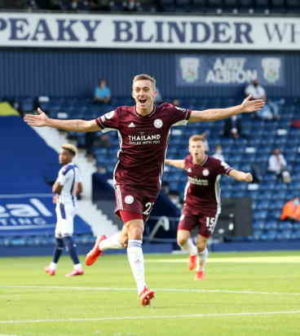 Leicester City welcomed West Bromwich Albion back to the Premier League with a 3-0 hammering at the Hawthorns in the opening game of their 2020-21 campaign.

Timothy Castagne made an excellent debut for the Foxes, opened the scoring just before the hour as he bombed up and down the right flank all afternoon.

Two penalties from Jamie Vardy in the final 20 minutes saw Brendan Rodgers’ side ease to victory in the end.

Callum Robinson started up front for the Baggies after spending the second half of last season on loan from Sheffield United and signing on a permanent basis this summer.

On the basis of today’s game, Slaven Bilic may need to invest further in attacking players if the West Midlands club are to avoid relegation at the first attempt.

It’s been a tough opening weekend for the three sides that came up from the Championship last season, with Fulham hammered 0-3 at home by Arsenal and Leeds United beaten 3-4 by Liverpool at Anfield on Saturday.