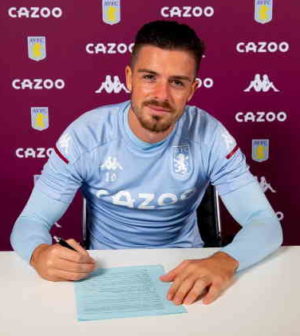 Jack Grealish has signed a new five-year deal at Aston Villa, the club have confirmed.

The 25-year-old had been strongly linked with a move to Manchester United all year.

Grealish scored the goal on the final game of the season versus West Ham United that kept the Villans in the Premier League in July.

The box-to-box midfielder earned his first England cap last week in the final 15 minutes of their 0-0 draw versus Denmark in the UEFA Nations League.

Aston Villa have signed Matty Cash from Nottingham Forest and Ollie Watkins from Brentford already this summer, but many fans will consider this contract renewal as the best deal the club have done so far.

Jack Grealish is quoted on the club’s official website as saying:

“I am delighted to make this commitment to Villa. It is my club, my home and I am very happy here. The owners have made it very clear to me how ambitious they are and how they want to build Aston Villa.  There are exciting times ahead and I am very glad to be part of it.”

Manchester United fans needn’t been too downtroded by this news. Previously the Villans signed Fabian Delph to a five-year deal and sold him to Manchester City the same summer.