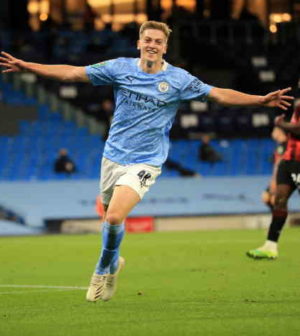 Prior to the Citizens’ second match of their 2020-21 Premier League campaign, the City boss has been speaking to the media at his pre-match press conference this morning.

City were without Sergio Aguero and Aymeric Laporte for their 3-1 win at Wolverhampton Wanderers last weekend, before rotating his squad heavily for their 2-1 win over Bournemouth in the EFL Cup midweek.

Phil Foden, Riyad Mahrez, Rodri, Ferran Torres and Eric Garcia all started among a very young starting XI versus the Championship side.

However, Raheem Sterling, Kevin De Bruyne and Benjamin Mendy all made appearances from the bench, whilst Nathan Ake was an unused substitute versus the club he joined from over the summer.

17-year-old striker Liam Delap, son of former Derby County and Stoke City midfielder Rory, opened the scoring on Thursday. With Aguero expected to be out for another two months, Delap could see more playing time.

Speaking to the media this morning, Pep Guardiola said:

“Well, the situation we have right now, we have just 13 players available in the first team. We need the academy, not just for the training sessions. They can be selected during the games.

“With the problems we have up front, of course Liam will stay with us. We’ll see if we need him or use him.

“But we cannot forget, like the same way we spoke about Phil Foden in previous seasons, he’s just 17 years old. He has a lot of things to improve, steps need their own time.”

Leicester City will have every reason to believe they can get a result from the Etihad Stadium with this news. Brendan Rodgers’ side have already taken maximum points through two teams, beating West Bromwich Albion 3-0 and Burnley 4-2.