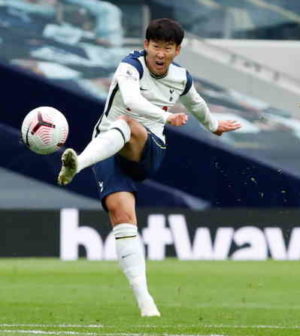 The North London club head to Manchester off the back of their 7-2 hammering of Maccabi Haifa in their Europa League play-off that saw Harry Kane net a hat-trick and Giovani Lo Celso grab a brace.

The two lineups for today’s game are:

Eric Bailly partners Harry Maguire in the centre of a back four, otherwise no surprises named by Ole Gunnar Solskjaer.

Donny van de Beek remains among the substitutes as Paul Pogba continues to partner Nemanja Matic in central midfield. Fred and Scott McTominay are both on the bench too.

Serge Aurier starts ahead of Matt Doherty at right-back whilst Sergio Reguilon makes his Premier League debut down the other flank. Jose names three defenders among the substitutes as Eric Dier surprisingly continues to start in the back four.

Heung-min Son is fit again to start in attack, whilst Erik Lamela is named ahead of Lucas Moura in the front three.

Manchester United have seen their odds drift slightly above evens following the confirmation of the lineups, similar to the odds you can get on a hand of blackjack at casinos like Online Casino Snoop. You can find odds around 3/1 on the visitors to come away with three points, just as Crystal Palace have done already this campaign.