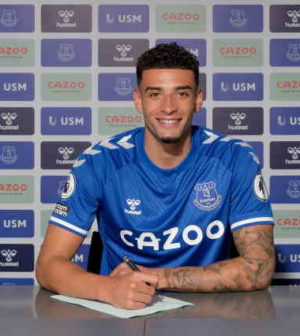 Everton have added another defender to their books with the signing of Ben Godrey from EFL Championship side Norwich City.

The 22-year-old made 30 Premier League starts last season but couldn’t help the Canaries avoid immediate relegation back down to the second tier.

Godfrey had started Norwich’s first three games on the new campaigns but missed Saturday’s 1-0 loss at home to Derby County amid speculation he was set to depart.

The Toffees confirmed the news on Twitter this morning:

Sky Sports understand Everton have completed the deal for £20 million.

Ben Godfrey becomes the fifth addition to Carlo Ancelotti’s side during this transfer window, following the arrivals of Niels Nkounkou, Allan, James Rodriguez and Abdoulaye Doucoure on Merseyside.

After the weekend’s results, Everton are the only Premier League side on four wins from four heading into this week’s international break.

The 6’0″ centre-back will be looking to compete with Michael Keane, Yerry Mina and Mason Holgate for a first team spot at Goodison Park.

Although I am not a huge fan of their current defence, Godfrey has a lot of work to do before he becomes a regular based on his performances last season.