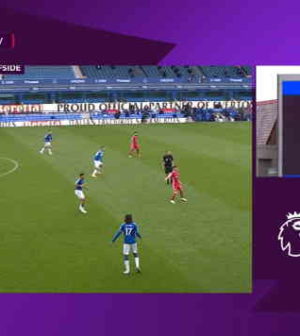 Everton and Liverpool played out a controversial 2-2 draw at Goodison Park on Saturday lunchtime as the Premier League returned from the international break with an entertaining tie on Merseyside.

Sadio Mane had given the defending champions the lead after three minutes and the hosts should have been reduced to 10 men soon after but referee Michael Oliver and VAR ignored Jordan Pickford’s nasty two-footed foul on Virgil van Dijk.

The centre-back was substituted and Michael Keane headed Everton level from a corner in the 19th minute.

Liverpool fans would have been confident of all three points in the final 20 minutes when Mohamed Salah produced a fine first-time strike from just inside the box to restore their lead.

The Toffees got their point when Dominic Calvert-Lewin came up with the goods again as the England striker rose highest in the box to head past Adrian with 10 minutes remaining.

Carlo Ancelotti’s side needed further assistance in stoppage time to pick up their 13th point from five games this season. Jordan Henderson appeared to have won the game before VAR decided to rule the goal out for offside.

However, replays showed Sadio Mane was clearly onside. Disallowing the goal was inexplicable and will have lost further confidence from football fans across the globe watching today’s game.