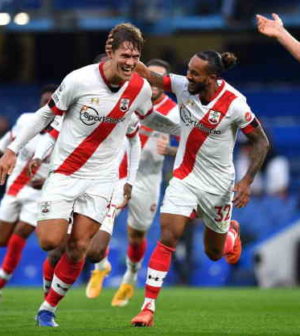 Chelsea have dropped points for the third time in their opening five games to start the 2020-21 Premier League season.

The Blues twice blew the lead in a 3-3 draw at home to Southampton on Saturday afternoon.

Big money summer signings Timo Werner and Kai Havertz both finally opened their account for Chelsea, who were pegged back by a Southampton equaliser in stoppage time.

Frank Lampard went with Andreas Christensen and Kurt Zouma in the middle of his back four as Kepa Arrizbalaga returned in goal. The young manager had confirmed on Friday that Edouard Mendy would miss out with a thigh injury after keeping a clean sheet on his debut directly before the international break.

Christian Pulisic was back to take up his place in a front three alongside Havertz and Werner in an exciting attack.

However, it’s Chelsea’s defence that is causing them issues this season – nine goals conceded in their first five matches. The manager will be hoping to turn things around when Mendy returns from injury. Left-back Ben Chilwell and experienced centre-back Thiago Silva were also recruited this summer.

The West London club remain five points behind leaders Everton after the Merseyside derby ended in a controversial 2-2 draw earlier today. Liverpool have moved up to second on 10 points ahead of the remaining fixtures this weekend.

Chelsea have been 3-1 winners at Brighton & Hove Albion and 4-0 at home to Crystal Palace this season, but beaten 0-2 at home by Liverpool. This is their second 3-3 draw in the opening weeks of the new campaign, having blown a 3-0 lead versus West Bromwich Albion at the end of September.