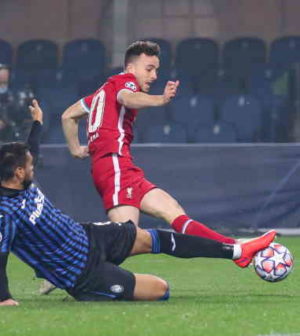 Liverpool will qualify for the knockout stages of the 2020-21 UEFA Champions League with victory over Atalanta at Anfield tonight.

The Reds were superb 5-0 winners in the reserve fixture in Italy only three weeks ago, which saw Jurgen Klopp’s side score all their goals before the hour, including a Diogo Jota hat-trick.

Atalanta are currently down in third place in the group but level on points with Ajax above them after three games.

Mohamed Salah is in line to make his return for Liverpool tonight, with the Egpytian having missed the weekend’s 3-0 win over Leicester City in the Premier League due to self-isolating.

The Reds could also see Roberto Firmino feature against the Italian side despite missing training this week. It is understood the Brazilian has no injury issues.

Atalanta will be without Mattia Caldara, Fabio Depaoli and Mario Pasalic for their trip to Merseyside. Manager Gian Piero Gasperini was able to welcome back Robin Gosens, Marten de Roon, Jose Luis Palomino and Pierluigi Gollini for the weekend’s 0-0 draw at Spezia.

Liverpool deserved their big win in Italy three weeks ago, and although they have a number of defensive injuries, we are confident the English side will pick up another three points in the reverse fixture tonight.

Atalanta failed to deal with the Reds’ attack, in which all three scored on the night – Jota, Salah and Mane.

The bookmakers agree with Liverpool odds around 8/13 to win and book their place in the Champions League knockout rounds with two group games to spare. The 22Bet Uganda sign-up bonus for new customers will give you a better return for your initial stake.

Liverpool have drawn the short straw in the Premier League though as they are back in action on Saturday lunchtime away to Brighton & Hove Albion, just two-and-a-half days after competing in Europe’s elite club cup competition against one of last season’s quarter-finalists.