Alli & Messi: How Poch’s PSG could look next season 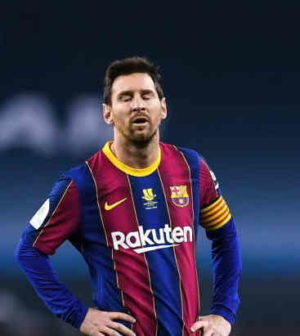 Layvin Kurzawa’s second half winner away to Angers on Saturday kept Paris Saint-Germain joint top of the 2020-21 French Ligue 1 as Mauricio Pochettino looks to win the title in his first season in charge.

The Argentine manager only took charge earlier in the month, replacing Thomas Tuchel at the turn of the year. Pochettino already has the Trophée des Champions under his belt, but the league is generally considered the minimum as PSG manager these days.

Following his appointment, Tottenham Hotspur outcast Dele Alli has been quickly linked with a move to the Parc des Princes.

A move to last season’s Champions League runners-up would be hard to turn down for the 24-year-old, who has had his best years to date under the current PSG boss.

Pochettino has liked the 4-2-3-1 formation in France and Alli could easily pick up the number 10 role, behind Mauro Icardi, linking up with the likes of Kylian Mbappe and Angel Di Maria.

That’s not the biggest star PSG have been linked to so far this year though. Lionel Messi is widely-expected to leave Barcelona this summer, which could be further heightened should they fail to win either the Champions League or La Liga.

The Catalan giants currently sit seven points off leaders Atletico Madrid and having played two more games than Diego Simeone’s side. The 33-year-old was linked to the French club last summer when he had once again been expected to leave Camp Nou.

It would certainly be interesting to see if Messi would be interested in a move to the French capital, with many expected Barcelona to be his one and only European club. A move back to Argentina could also be on the cards. That is, if he does not prolong his stay in Spain.

But should Paris Saint-Germain be successful in their chase for both Lionel Messi and Dele Alli, here is how their starting XI could look next season. Champions League winners anyone?

It’s a mouth-watering proposition in attack that would arguably see Dele Alli struggle for a spot in the starting lineup in the big matches.

Work still needs to be done on the defence though, shipping two goals at home to Manchester United in the Champions League this season, and keeping just two clean sheets in their six group stage fixtures. But there’s plenty of time and money available for Pochettino to fix that…