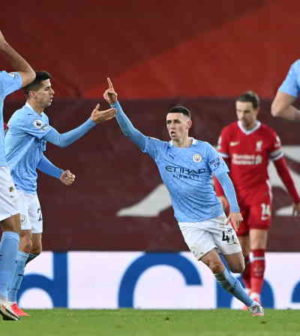 Manchester City ran out 4-1 winners at Anfield to extend their lead over defending Premier League champions Liverpool to 10 points and with a game in hand.

After a goalless first half that included Ilkay Gundogan skying a penalty, the German international redeemed himself less than five minutes after the restart by giving City the lead from close range.

Pep Guardiola’s side had been well on top afterwards before a clumsy mistake from Ruben Dias handed Liverpool a penalty from which Mohamed Salah converted just after the hour.

It would be Alisson’s turn to make the next mistake in the game as the Brazilian goalkeeper gifted possession away, leading to Gundogan scoring from close range again, this time on 73 minutes.

The Liverpool goalkeeper seemingly hadn’t regained his concentration three minutes later when he again gave away possession in front of his own goal, allowing Bernardo Silva to pick out an unmarked Raheem Sterling to head home at the back post for 3-1.

A fine solo effort from man of the match Phil Foden rounded off the scoring for the visitors in the final 10 minutes.