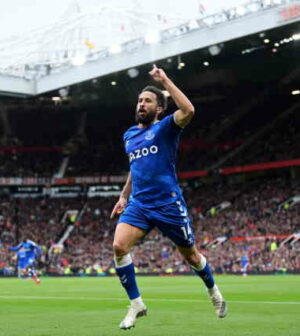 Manchester United were held to a 1-1 draw at home to Everton in the Premier League’s Saturday lunchtime kickoff.

Anthony Martial had given the hosts the lead shortly before half-time which came somewhat against the run of play at the time.

Aside from taking the game to Rafa Benitez’s side in the opening 10 minutes, it was the Merseyside club who had the better of the first half prior to the French forward’s first goal since February.

United, who had beaten Villarreal 2-1 in the Champions League on Tuesday night courtesy of a Cristiano Ronaldo goal five minutes into stoppage time, weren’t at the races today. The Portuguese superstar himself didn’t come on today until the 57th minute.

Some excellent work in midfield and down the wing by Demarai Gray sparked a counter attack that was well finished by Andros Townsend for Everton’s equaliser just after the hour mark.

The Toffees themselves thought they had a late winner at Old Trafford today as VAR overturned Yerry Mina’s late tap-in for being offside.

Manchester United move joint top of the Premier League table with the remaining games this weekend still to be played, whilst Everton remain behind Ole Gunnar Solskjaer’s side only on goal difference after seven games.