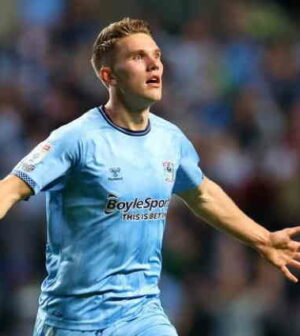 Coventry City continue to turn heads in the 2021-22 EFL Championship season with a 4-1 demolition of Fulham at the Coventry Building Society Arena on Saturday lunchtime.

The Sky Blues had actually gone into the break down 0-1 courtesy of a Kyle McFadzean own goal that was allowed to stand despite appearing to be fouled by Aleksandar Mitrovic.

Mark Robins’ side battled back in dramatic fashion after the break, scoring three goals in a 15-minute spell.

The first of those came from Viktor Gyokeres who tapped into an unguarded net following a set up from Callum O’Hare.

Four minutes later Matt Godden won and converted a penalty to give Coventry the lead.

On-loan Chelsea midfielder Ian Maatsen made it 3-1 on the hour with a superb left-foot strike into the left corner, giving Fulham goalkeeper Paolo Gazzaniga no chance.

Swedish striker Gyokeres made it 4-1 in the final 20 minutes – he now has nine on the season and only one behind the division’s leading scorer, Mitrovic.

This surprise victory came just three days after Coventry were humiliated 0-5 away to Luton Town. The West Midlands club move up to level on points with both Bournemouth and West Bromwich Albion, with the former hosting Sheffield United shortly.

The Cottagers drop down to fifth in the table heading into the international break, two points behind the three joint league leaders.