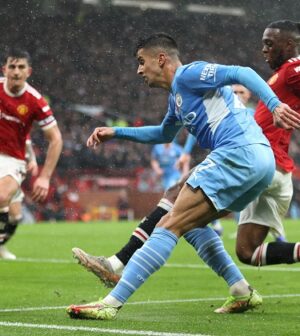 Manchester City rubbed salt into the wounds of city rivals Manchester United with a comfortable 2-0 victory at Old Trafford on Saturday lunchtime.

Pep Guardiola’s side took the game to to the Red Devils from the opening kickoff and were rewarded for their early endeavor when Eric Bailly turned Joao Cancelo’s cross into his own net in the seventh minute.

City dominated possession and territory for the opening half but were denied on two occasions by fantastic saves from David de Gea before they doubled their lead.

At the end of the first half, Joao Cancelo’s innocuous cross was left by both Harry Maguire and Luke Shaw, allowing Bernardo Silva to get a toe poke onto the ball, which was parried into his own net by de Gea.

Jadon Sancho replaced Eric Bailly at the break as Ole Gunnar Solskjaer switched from a 3-5-2 to 4-2-3-1.

Manchester City took their pedal off the metal in the second half but Solskjaer’s side failed to create any real chances.

A frustrated Cristiano Ronaldo was booked in stoppage time for a late, nasty tackle on Kevin De Bruyne after the whistle had already been blown for a free kick.

Victory moves the Citizens two points behind leaders Chelsea, who host Burnley later today. Manchester United are in 5th and could drop to as low as 10th if results go against them for the remainder of the Premier League weekend.