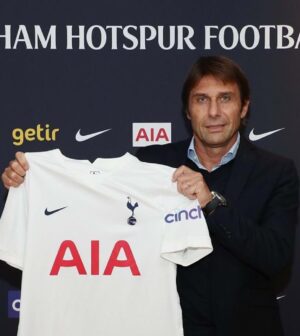 Tottenham Hotspur have this afternoon confirmed the appointment of Antonio Conte as their new manager.

The Italian replaces Nuno, who was shown the door following their 0-3 thrashing at home by Manchester United over the weekend.

Conte guided Internazionale to the Italian Serie A title last season before resigning shortly afterwards after falling out with the owners. He previously won the Premier League with Chelsea in 2016-17.

The former Juventus and Italy midfielder has signed a deal until the summer of 2023 with the North London outfit.

Antonio Conte’s first game in charge of Spurs will be against Vitesse in teh UEFA Europa Conference League on Thursday, before facing Everton in his first Premier League game on Sunday.

Tottenham will start the weekend five points outside of the Champions League places down in ninth place.