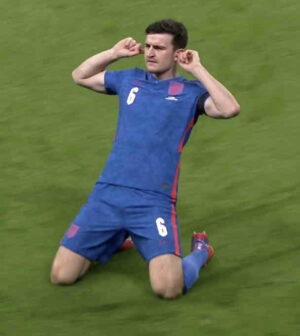 England need to avoid defeat in San Marino on Monday night in order to book their place at the 2022 World Cup in Qatar next November.

The Three Lions ran out convincing 5-0 winners at home to Albania at Wembley Stadium on Friday night in order to get them closer to winning their group.

Manchester United centre-back opened the scoring with a header from a set piece inside nine minutes.

Tottenham Hotspur striker Harry Kane scored a fine first half hat-trick either side of Jordan Henderson’s goal. The Euro 2020 runners-up took the foot off the gas after the break as no more goals were scored.

Former Manchester United captain Roy Keane has been known for his attention-seeking comments since becoming a pundit and few will have been more angry when speaking about Maguire post-game last night.

Speaking on ITV, Keane described the England centre-back’s celebration as:

“When a player scores puts his hands to his ears he’s like shutting the critics up, but I think that’s embarrassing, he’s been a disgrace to Man United. He thinks he scores there he’s shut his critics up, embarrassing.”

Manchester United have conceded 23 goals in their last 13 games with the 28-year-old at the heart of their defence. Maguire has largely failed to impress following his record transfer fee for a centre-back when signing from Leicester City in 2019.

Watch Harry Maguire’s goal and listen to Roy Keane’s comment in the video below: