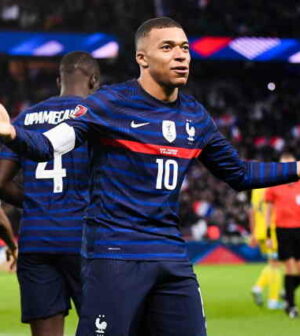 Defending world champions France emphatically booked their place at Qatar 2022 on Saturday with an 8-0 hammering over lowly Kazakhstan.

Didier Deschamps’ side haven’t been overly impressive in qualifying, recording only their fourth win from seven in a group that also includes Finland, Ukraine and Bosnia and Herzegovina.

Heading into today’s game, no France player had scored a competitive hat-trick since all the way back in 1985.

Given the talented striker’s the country has produced between then and now it seems quite remarkable.

Kylian Mbappe ended the 36-year drought with a first-half hat-trick versus Kazakhstan before adding a fourth late on.