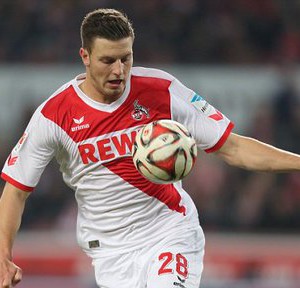 It had been expected that the 22-year-old would move to White Hart Lane over the past few months, with Spurs boss Mauricio Pochettino understood to have sent his scouts several times to watch the centre-back in action this past season.

Earlier this week it had been suggested that a deal was close to completion after Wimmer flew in to London to undergo a medical and sign a five-year contract.

Those formalities have now been completed as Tottenham have this morning announced the Austrian international has joined the club.

A statement on TottenhamHotspur.com says:

“We are delighted to announce that we have completed the signing of Kevin Wimmer from 1. FC Köln.

The central defender has signed a five-year contract.”

Wimmer moved to FC Köln from Austrian Bundesliga outfit LASK Linz in 2012, quickly establishing himself as a regular in the first-team, and was a part of the side that secured promotion back to the German top flight in 2014.

The youngster impressed in the Bundesliga this past season and, to the point that he’s now earned himself a big money move to the Premier League.

Tottenham have not disclosed how much they have paid for his services, but the Telegraph claim the fee is in the region of €6 million (£4.3m), which represents good value for a player of his quality and rated as having good potential.

Wimmer will now battle-it-out with the likes of Jan Vertonghen and Federico Fazio for a starting spot in Pochettino’s 2015-16 team.

The Austrian’s arrival casts further doubt over the futures of Younès Kaboul and Vlad Chiricheș – both of whom are expected to leave this summer.