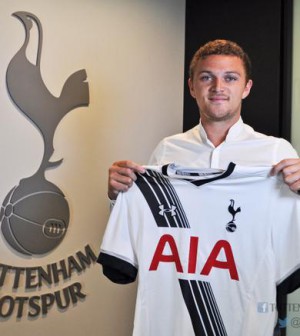 Tottenham Hotspur have confirmed the signing of Kieran Trippier from relegated Burnley.

The 24-year-old was one of the Clarets’ better players during their season which ended going back down to the Championship at the first attempt.

SIGNED: We are delighted to announce that we have completed the transfer of @trippier2 from Burnley. pic.twitter.com/f43daSAyDd

Trippier has signed a five-year deal at White Hart Lane with the transfer fee not announced, but matching his undisclosed buy-out clause.

A former Manchester City trainee, Trippier was a vital part of Burnley’s surprise promotion campaign to the Premier League in 2013-14, finishing runners-up to Leicester City where he recorded an impressive 14 assists from right-back in the second tier.

Kieran Trippier was an ever-present for Burnley last season, managing four assists for the lowest-scoring team in the league.

He will compete with Kyle Walker, Eric Dier and DeAndre Yedlin for the starting right-back role last season.

Trippier is the second signing Tottenham have made this summer, following centre-back Kevin Wimmer’s £4.3 million arrivial from German Bundesliga side 1. FC Köln.

Tottenham conceded the most goals amongst the top 13 finishing sides in the Premier League last season.