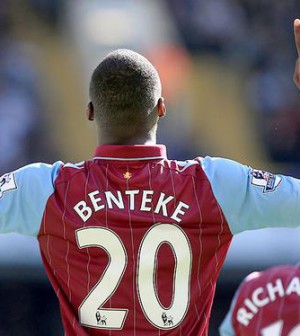 Aston Villa striker Christian Benteke would snub a move to Tottenham Hotspur even if the two clubs agree a transfer, according to the London Evening Standard.

Reports this week are suggesting the north London club are looking to negotiate a deal with Villa which would see Emmanuel Adebayor go in the other direction.

However, the Standard understand that Benteke is not interested in a move to Tottenham and that his preference would be Liverpool, who have also been linked with the Belgian international for some while now.

Benteke scored 13 goals in 29 Premier League appearances for struggling Villa last season and a further two in the FA Cup as they made it all the way to Wembley for the final.

With few top strikers seemingly on the market this summer, Liverpool may have few or no other options but to match Aston Villa’s asking price of £32.5 million for the 24-year-old if Brendan Rodgers is to add another goalscoring threat to his side before the start of the 2015-16 season.

Liverpool scored only 52 goals last season – the fewest amongst the top seven sides in the Premier League, and Daniel Sturridge is not due back until September after spending much of the 2014-15 campaign on the sidelines.