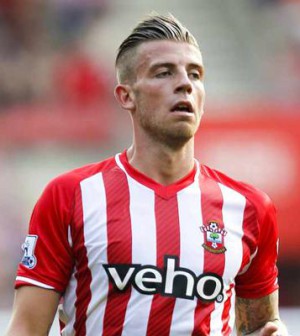 Tottenham Hotspur chairman Daniel Levy is keen to land Atlético Madrid defender Toby Alderweireld this summer, so much so that he is set to fly out to the Spanish capital himself to try wrap up a deal for the Belgian international, according to a Belgian football journalist.

Tottenham are set for negotiations with Atlético over Alderweireld later this week. Daniel Levy is expected to fly to Madrid (via @hlnsport)

Toby Alderweireld spent last season on loan at Southampton in the Premier League and has been linked with a transfer to three English sides this summer – the Saints, Spurs and Premier League champions Chelsea.

The London Evening Standard reported yesterday that Tottenham were looking to secure a £14 million deal for the highly-rated Belgian.

Tottenham are reported as being the preferred destination of the 26-year-old as speculation linking him with a move to Stamford Bridge have died down.

Defensive additions are high on Mauricio Pochettino’s agenda this summer as the 53 goals conceded by his side last season were the most of any teams in the top 13 in the Premier League.