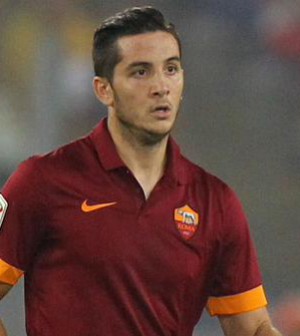 Arsenal and Tottenham Hotspur have contacted the agent of AS Roma’s Kostas Manolas over the availability of the centre-back, according to reports in Italy.

Gazzetta Dello Sport are reporting the news but state that the Premier League duo will have a tough time persuading the Italian side to sell the Greek international this summer.

Manolas is coming off the back of an excellent debut season in Serie A following his £11 million move from Olympiacos last summer as Roma finished second in the table.

The 24-year-old was Roma’s replacement for Mehdi Benatia whom they sold to Bayern Munich in a big-money move 12 months ago.

His form has caught the eye of the north London rivals as the Italian newspaper is claiming that both Arsenal and Spurs have been in touch with Manolas’ agent, Mino Raiola, to discuss a possible transfer this summer.

Arsenal have been linked with a number of centre-backs in recent weeks as it appears Arsène Wenger is looking to strengthen his options in defence despite having only signed Gabriel Paulista back in January.

The Gunners were linked to the Greece centre-back last summer but as he opted for the Italian capital then it would be difficult to see him switching to the Premier League only a year later.

Meanwhile, Tottenham have already signed Kevin Wimmer and Toby Alderweireld this summer, so it’s interesting to see that Mauricio Pochettino is interested in Kostas Manolas as well.  Though whether the player would want to switch UEFA Champions League football to Europa League next season remains to be seen.

With Gazzetta Dello Sport claiming that Rudi García rates Manolas as indispensable, it will interesting to see if either Premier League side can muster up a deal, but CSAR believe both sides will have to look elsewhere for another centre-back this summer.