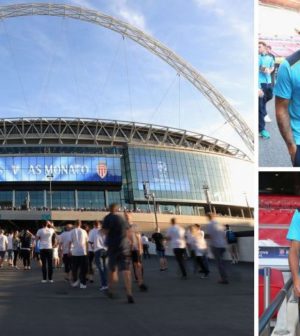 After enjoying an impressive start to the 2016-17 season, Tottenham Hotspur are ready to welcome a financial boost from a Qatar-based party.

As reported by The Times, a Qatar-based party is interested in owning the naming rights of Spurs’ new stadium. Moreover, they are not reluctant to pay a big fee to achieve their goal.

Talks between both parties have intensified in the last few weeks after the Qatar Investment Authority ended their partnership with Spanish giants Barcelona.

According to reports, the QIA were impressed after Spurs sold out Wembley for their opening home game of this season’s UEFA Champions League against AS Monaco on Wednesday night. With more than 85,000 fans watching Spurs in the Champions League, Daniel Levy and co. have every reason to boast about the financial capabilities of the club.

Thus, ahead of showing a monumental fan base at Wembley midweek, Tottenham are confident that such a strong show of power will lure interest from the Qatar-based party.

Due to some ongoing work at White Hart Lane, Tottenham are playing their home matches of the Champions League at Wembley Stadium this season.

QIA possess a vast amount of funds and if Spurs manage to strike a deal with them, it will be a huge boost for the North London Club.

Remember, Tottenham will shift into their new home ground at the start of the 2018-19 campaign, and if reports are believed to be true, Daniel Levy is expected to generate hefty money from this particular activity.

The North London club have locked horns with the Qatar Investment Authority as Spurs are looking for a lucrative deal to name their new stadium.

While arch-rivals Arsenal generated huge sums of money by agreeing on a deal with Emirates a few years ago, this time, it’s Spurs who are expected to do the same in the coming months.

Remember Tottenham have enjoyed huge success in the past few seasons, finishing third in the Premier standings last season, Mauricio Pochettino’s side have developed themselves into a real force in the Premier League.

So with all the incoming wealth, it will surely improve their chances of lifting some silverware in the near future.

However, this news won’t go well with a fraction of Spurs fan base whom think that it will be against the club’s heritage to name their home club to a Qatar based party. So it will be interesting in the coming months to see how this story develops…