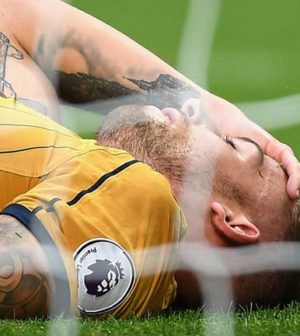 After 10 games, Tottenham are still the only Premier league club that is yet to lose a single game. However, recent games the North Londoners have played have shown a decline in their form. The 1-1 draw against Leicester City is the third in as many games that Tottneham have drawn. With all of the other title contenders (Manchester City, Arsenal, Chelsea and Liverpool ) winning their games this past weekend, Tottenham manager Mauricio Pochettino and his team sure do know they cannot continue to draw matches if they want to have a real go at the Premier League.

For this, Pochettino needs his team fully fit. Although they have coped very well without several key first-team players so far, with the games coming up thick and fast, I doubt they will be able to cope for much longer. Pochettino now has new worries with reports claiming defender Toby Alderweireld could miss the Bayer 04 Leverkusen clash in the UEFA Champions League this week and the North London derby against Arsenal six days later.

The Belgian limped off against West Brom two weeks ago with what turned out to be a knee injury. Although it was thought to be a minor injury, if new reports are to be believed, Alderweireld has suffered a setback.

It appears the centre-back is going to miss the Champions League clash against Leverkusen which will be a big blow. A win against the Germans at Wembley will give Tottenham a big boost in their bid to qualify for the second round. However, the bigger blow will be if he misses the Arsenal clash.

Toby Alderweireld missing the North London derby will be a big blow to Tottenham especially considering Arsenal’s form and the fact that the Gunners now have many of their key players back from injury. With the way Arsenal are scoring for fun, Tottenham’s defenders will have to be at their best to contain the Gunner’s attack.

Toby Alderweireld won’t play against Leverkusen and is a doubt for Arsenal. He is slowly recovering from his knee nerve injury. #thfc #coys pic.twitter.com/RBegmA8sBH