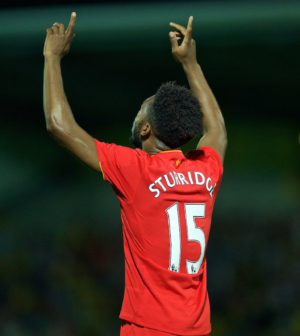 Liverpool will be looking to get a rare win of late when they face Championship side Wolverhampton Wanderers in the FA Cup fourth round at Anfield on Saturday lunchtime.

The Reds have won only one of their last 10 games in all competitions, a replay versus League two promotion contenders Plymouth Argyle in the previous round.

Here is the team I think Jürgen Klopp will field in tomorrow’s early kickoff:

Goalkeeper: Loris Karius
Simon Mignolet did start midweek’s EFL Cup exit at the hands of Southampton but I believe Klopp will go with Loris Karius once again in the FA Cup as he did in both matches versus Plymouth Argyle in round three.

Defence: Trent Alexander-Arnold, Ragnar Klavan, Joe Gomez, Alberto Moreno
Nathaniel Clyne was absent midweek with a rib injury and I don’t see him being risked this weekend with a big Premier League match at home to Chelsea on Tuesday so youngster Trent Alexander-Arnold should get another start this weekend at right-back.  Alberto Moreno is also expected to get another cup run out with James Milner being rested at left-back.  Joël Matip’s return means Ragnar Klavan is about to be demoted to backup in the Premier League so the Estonian should be the leader at the back of this defence on Saturday, partnering youngster Joe Gomez in the middle.

Midfield: Lucas, Ovie Ejaria, Georginio Wijnaldum
Fielding a majority XI of youngsters versus Plymouth didn’t prove fruitful in the first meeting so I think we’ll see a more experienced midfield this weekend.  Jordan Henderson is still feeling discomfort in his heel so the club captain won’t be facing Wolves.  Instead, the experienced Lucas can sit in front of the back four.  Georginio Wijnaldum was on the bench versus Southampton so could be in line to start this one which would also suggest Emre Can may start against Chelsea on Tuesday.  With Can and Adam Lallana likely to be rested for this one, a place opens up for a youngster.  I see Ovie Ejaria getting the nod ahead of Kevin Stewart with the latter being of a similar mold to Lucas.

Attack: Daniel Sturridge, Divock Origi, Ben Woodburn
Daniel Sturridge was poor versus Southampton but I think he’ll get another start in hope that he’ll find his form soon ahead of the business end of the Premier League season.  The England international should be partnered with Divock Origi, another first team squad member who could do with finding his form again.  Youngster Ben Woodburn could make up the front three with Philippe Coutinho and Roberto Firmino both getting a rest.

Click here to get 5/1 on Liverpool to beat Wolves!

Here is how I think Liverpool will line up: 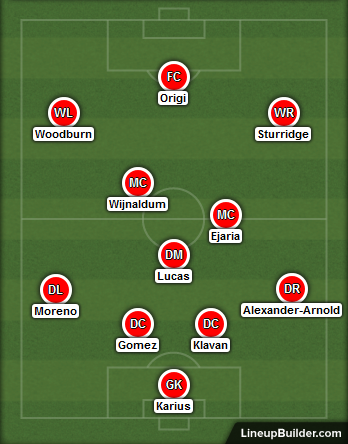