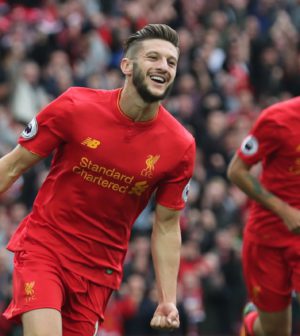 Liverpool will be looking to get back to winning ways and book their place in the FA Cup fifth round in the process when they take on Wolverhampton Wanderers at Anfield tomorrow lunchtime.

Prior to the game, Jürgen Klopp has spoken to the media at his pre-match press conference today and given Liverpoolfc.com a team news and injury update.

The Reds boss revealed that he has a concern of Adam Lallana and that the England international is a major doubt to face Wolves tomorrow having suffered a nasty cut versus his former side in Wednesday’s EFL Cup semi-final exit at the hands of Southampton.

Lallana required stitches and his manager has today said that he isn’t prepared to take a risk on him for the FA Cup tie even though it sounds as though the midfielder won’t be out for too long.

Klopp is quoted by Liverpoolfc.com as saying:

“It’s not final who we can line up tomorrow, because we had a few knocks after the game and have to wait a little bit.

“But we’ll have enough and a very good team for tomorrow. We will not make 10 changes or something. A few changes we have to make.

“A real injury problem… Adam Lallana got a cut, maybe you saw it. I’m not sure we should now try, if the stitches are really good enough or whatever. But not more.”

We shall have to wait and see how many changes Klopp decides to make but we know for sure that Adam Lallana won’t play.  CSAR also believe that the likes of Simon Mignolet, James Milner, Dejan Lovren, Jordan Henderson, Philippe Coutinho and Roberto Firmino will all be rested ahead of Tuesday’s huge Premier League encounter with Chelsea.

The Merseyside club are currently in fourth position, some 10 points behind the Premier League leaders who they take on at Anfield three days after both clubs are in FA Cup action.