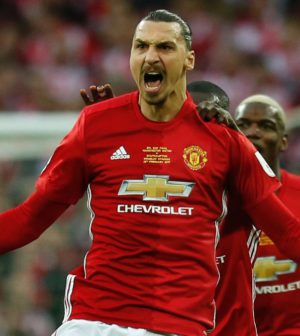 The Manchester United striker opened the scoring with a special free kick on 19 minutes before Jesse Lingard found time and space inside the penalty area to double their lead on 38 minutes.

Southampton had taken the game to José Mourinho’s side in the first half and even had an 11th-minute opener unfairly ruled out for offside.  Manolo Gabbiadini had put the ball into the back of the net then and did so again in first-half stoppage time to make it 1-2 at the break.

The Italian struck a sweet effort on the turn to make it 2-2 in an end-to-end game before Zlatan headed home from close range in the 87th minute to lift his 32nd trophy as a player.

David de Gea 6 – Nutmegged from close range by Manolo Gabbiadini to reduce Southampton’s deficit to 2-1 just before half-time.  Couldn’t do much with the Italian’s equaliser and was saved by the outside of the post early in the second half.

Antonio Valencia 7 – Busy game defensively and didn’t get involved in too many attacks from right-back as he usually does.

Eric Bailly 7 – Beaten all ends up by Gabbiadini for Southampton’s goal at the end of the first half.  Made a number of tackles, blocks and interceptions to keep Southampton at bay either side of their two goals

Marcos Rojo 6 – Had a tough game at left-back as Southampton attacked well down the wings.

Ander Herrera 7 – Got stuck in time and time again in the middle of the park and even created the odd chance going forward too, including the assist for the winner.

Paul Pogba 7 – Was a positive influence in the middle of the park, bringing the ball forward and winning it back a couple of times.  Didn’t create anything and his effort on target wasn’t too difficult for Fraser Forster.

Jesse Lingard 7 – Spent most of the first-half defending but found time and space in the Southampton penalty area to coolly tuck home United’s second.

Juan Mata 5 – Didn’t get on the ball a lot in the first half as Southampton were on top of the possession, and replaced by Michael Carrick at half-time as United looked to get on the ball more.

Anthony Martial 7 – Made a couple of good runs down the wing and created a couple of chances but didn’t test the opposition goalkeeper himself.

Michael Carrick (45 mins) 7 – Helped United look after the ball in the second half as Southampton had the majority of the possession in the first half.

Marouane Fellaini (2 mins) N/A – Brought on in the final few moments to help see out the 3-2 win.