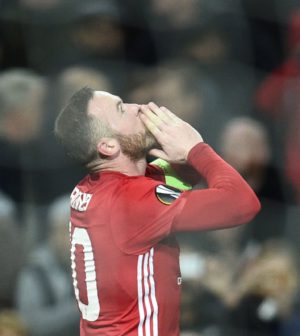 Manchester United manager José Mourinho has admitted that Wayne Rooney could feature for the Red Devils in Sunday’s EFL Cup final against Southampton at Wembley.

Earlier this week the United captain released a statement insisting he was staying at Old Trafford despite huge speculation he would move to China before the close of their transfer window.

Rooney has not featured for the club since their goalless draw versus Hull City at the start of February, but with Henrikh Mkhitaryan ruled out through injury, the England international could see some game time this weekend.

“You know that we normally play two different systems – sometimes we play with two midfield players and a number 10 if you want to call it (that).

“Sometimes we play with a number six and two midfield players in front.

“Without Mkhitaryan, if we want to play with a number 10, obviously Wayne, it’s his position, it’s where he was playing with us many matches, so he is an option for me.

“A final is a special match and he is an option for me.”

Wayne Rooney has struggled for game time all season under Mourinho and while he may be afforded some minutes off the bench this weekend, it is difficult to see him starting the game.

José Mourinho is expected to make changes from the side that beat Saint-Étienne in the UEFA Europa League on Thursday with David de Gea likely to return in goal and Antonio Valencia replacing Ashley Young at right-back.

Eric Bailly and Chris Smalling should continue at the heart of the defence, with Daley Blind again expected to start at left-back.

However, Michael Carrick is an injury doubt for the game but should play if fit, along with Ander Herrera and Paul Pogba in midfield as part of United’s 4-3-3 formation.

Ahead of them, Anthony Martial, could return on the left of a front three with Zlatan Ibrahimović centrally and Juan Mata on the right.

Ibrahimović looks destined to start, despite playing midweek, while Mata should also start.  The Spaniard has an uncanny knack of scoring in big games, and was on target in the FA Cup final win back in May.  Wayne Rooney, meanwhile, may have to settle for a place on the bench.