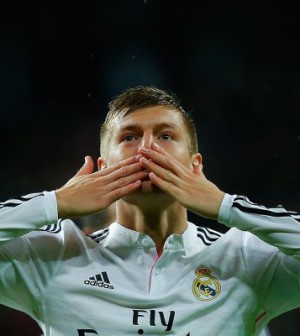 Manchester United could be set to land Real Madrid midfielder Toni Kroos this summer with the German international open to a move to Old Trafford, according to Spanish outlet Diario Gol, as reported by the Daily Star.

The report claims Kroos could be tempted to quit the Santiago Bernabéu Stadium should the Spanish giants finish the season empty-handed.

Zinedine Zidane’s side have been knocked off the top of the Spanish La Liga table by rivals Barcelona, although they do have a game in hand, and have already been dumped out of the Copa del Rey.

Los Blancos remain in contention in the UEFA Champions League, although they will need no reminding that no team has managed to retain the trophy in its current format, with the competition starting to hot up as the tournament nears the quarter-final stage.

Manchester United have long been interested in signing Toni Kroos and reportedly came close to a deal under David Moyes only for the move to fall through and the midfielder head to Madrid instead.

José Mourinho is believed to be a huge fan of the 27-year-old and is keen to bring him to the Premier League to replace Michael Carrick.

Carrick is out of contract this summer and has recently admitted he could retire at the end of the season if no extension is offered.

Although many names have been touted as being the perfect replacement for Carrick, Toni Kroos really does fit the bill and is similar to the former-England international in many ways.

A deep-lying midfielder, his lack of pace is more than compensated for by his superb range of passing and vision and his ability to make teams click.

Kroos’ ability to take control of games from the centre of the park is second to none and a potential partnership alongside either Ander Herrera or Paul Pogba could take some beating.

The 2014 World Cup winner would also be able to replace Carrick’s experience in the dressing room as Kroos has won three league titles and two UEFA Champions League’s at club level, and knows exactly what it takes to win the biggest competitions in the world.

Of course Kroos would not come cheap but United appear willing to spend big again this summer and proved last summer they are still able to attract the biggest names in football to Old Trafford.