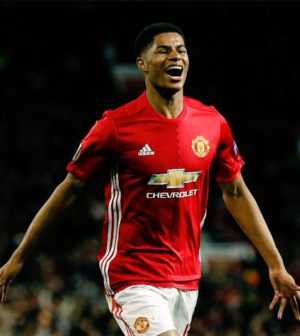 José Mourinho’s side have been emphatic 3-0 winners over FC Basel and 4-1 at CSKA Moscow to start their campaign but were held 0-0 at Liverpool in the Premier League on Saturday after they returned from the international break.

Meanwhile Benfica have started their Champions League campaign with back-to-back defeats and were only 1-0 winners in the Portuguese Cup on Saturday in a game they were expected to win by a wide margin.

Here the team we think Mourinho will field at the Estádio da Luz:

Goalkeeper: David de Gea
José Mourinho has previously confirmed that he will not be rotating his goalkeepers for this season’s Champions League and that David de Gea will remain the first choice as he has been in the two previous games so far this season.

Defence: Antonio Valencia, Victor Lindelöf, Chris Smalling, Ashley Young
Eric Bailly is still out with an injury picked up with the Ivory Coast over the international break so the Champions League partnership of Victor Lindelöf and Chris Smalling looks set to continue on Wednesday.  Antonio Valencia should continue at right-back where he can bomb forward in a game United are expected to have the majority of possession.  Matteo Darmian is the alternative option and the Italian could also start at left-back but I think this role will be handed to Ashley Young to get some in-swinging crosses in from that side.

Midfield: Nemanja Matić, Ander Herrera, Juan Mata, Henrikh Mkhitaryan, Marcus Rashford
Injuries to Paul Pogba, Marouane Fellaini and Michael Carrick mean that Nemanja Matić and Ander Herrera basically select themselves as the defensive midfield duo, unless Mourinho wants to go with 20-year-old Scott McTominay in the starting XI.  Anthony Martial started on the left at the weekend so I think Marcus Rashford rotates in midweek.  Henrikh Mkhitaryan could do with a good performance in the number 10 role whilst Juan Mata should start down the right though Jesse Lingard is an option, as is Ashley Young if he doesn’t start at full-back.

Striker: Romelu Lukaku
After a frustrating game at Anfield on Saturday I think Romelu Lukaku and José Mourinho will both be keen to get the £90 million striker back on the scoresheet midweek before travelling to Huddersfield Town in the Premier League at the weekend.  Should come up against the very experienced and ageing Luisão in the Benfica defence.

Here is how Manchester United line up on paper: 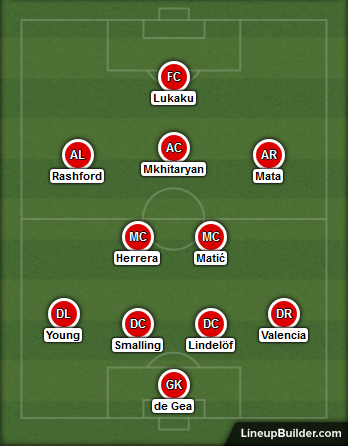