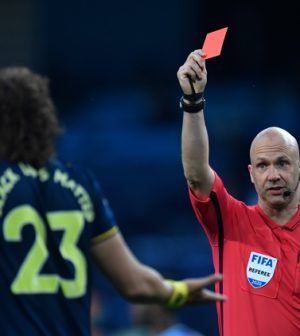 Manchester City have delayed Liverpool’s 2019-20 Premier League title crowning for at least another week with a comfortable 2-0 victory over Arsenal on Wednesday night.

This was the second game back following the restart, after Aston Villa and Sheffield United played out a controversial 0-0 draw at Villa Park earlier in the day.

It had been a slow start to the game which also saw the Gunners losing Granit Xhaka to injury in the opening couple of minutes, replaced by Cedric Soares, making his debut since signing on loan from Southampton at the end of January.

Midway through the first half the visitors lost their second player to injury when Kieran Tierney limped off to be replaced by David Luiz. The full-back had pulled up when trying to chase Raheem Sterling moments earlier.

The game picked up in the final 10 minutes of the first half as Manchester City got well on top before opening the scoring in first half stoppage time. It came courtesy of another howler from David Luiz.

Kevin De Bruyne’s tame pass was straight in the direction of the Brazilian centre-back, who not only failed to get his body in front of the ball, but knocked it on kindly for Raheem Sterling.

The England forward raced through to power home from close range for his first Premier League goal of 2020.

Five minutes into the second half and Luiz’s game went from bad to worse to over. Riyad Mahrez got in between the defender before being hauled to the ground inside the area. Arsenal were reduced to 10 men.

De Bruyne took the spot kick duties and smashed City into a 2-0 lead that they never looked back on.

Heading into the final 20 minutes both sides made numerous substitutions to keep players fresh for their matches over the weekend.

There was a lengthy break for Eric Garcia to be treated and stretchered off after a nasty-looking collision with his own goalkeeper, Ederson. 11 minutes of stoppage time were added.

Phil Foden scored in that time, rebounding home after Sergio Aguero’s effort had been tipped onto the post by Bernd Leno.