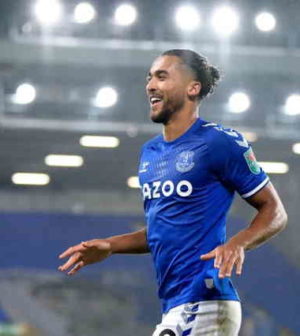 Everton dropped their 100% winning start to the 2020-21 Premier League season with a controversial 2-2 draw at home to Liverpool on Saturday lunchtime.

The defending champions were twice ahead, through goals from Sadio Mane and Mohamed Salah, before Michael Keane and Dominic Calvert-Lewin both headed home equalisers for the hosts.

Liverpool would be robbed of all three points due to a controversial VAR decision to rule out Jordan Henderson’s goal for offside, despite the replays showing Mane to be onside.

Here are 10 stats from Everton 2-2 Liverpool:

5 – Dominic Calvert-Lewin is the first Everton player to score in each of the club’s first five Premier League games to start a campaign.

6 – James Rodriguez has now been involved in six goals in his first five games for Everton (3 goals, 3 assists).

13 – Liverpool have conceded 13 goals in their first five games this season – they averaged less than a goal a game last season (0.87).

14 – Everton haven’t led in any of their past 14 Premier League matches against the Reds.

15 – The Toffees’ 15 red cards in this fixture is a Premier League record for one side against a single opponent.

19 – Adrian has conceded 19 goals in his 13 Premier League games for Liverpool. The Reds have conceded just 27 in their 30 games without the Spaniard.

20 – Liverpool are unbeaten in their past 20 Premier League meetings against their rivals (W8, D12).

22 – Everton versus Liverpool has seen more red cards than any other fixture in Premier League history.

89% – Eight of the last nine Premier League meetings between these two at Goodison Park have ended in a draw.

96 – Everton have seen more red cards than any other club in Premier League history.