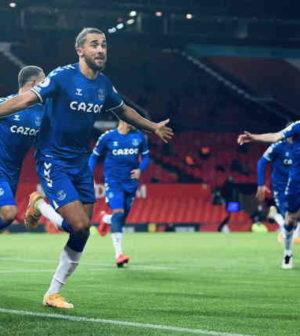 A last-gasp equaliser from Dominic Calvert-Lewin denied Manchester United the opportunity to go back on top of the Premier League on Saturday night.

Ole Gunnar Solskjaer’s side had ran out to a 2-0 lead at half-time through goals from Edinson Cavani and Bruno Fernandes, before Everton came roaring back in the opening seven minutes of the second half.

United fans may have through they had won it through Scott McTominay’s strike in the 70th minute but England international Calvert-Lewin saw the Toffees pick up a point on their travels.

David de Gea 3 – Another error-prone performance from the Spaniard, at fault for Abdoulaye Doucoure’s equaliser and too weak for the third in stoppage time.

Victor Lindelof 6 – Kept Richarlison quiet but made too many mistakes himself.

Harry Maguire 5 – Beaten too easily for Everton’s first goal and a miscommunication with his centre-back partner lead to their second.

Luke Shaw 8 – Got forward a lot and saw a 20-yard effort parried away by Robin Olsen moments after Everton had pulled one back. Provided the free kick from which McTominay restored United’s lead.

Scott McTominay 8 – Excellent in the middle of the park for the Red Devils, starting attacks and heading United into a 3-2 lead. Closed down the opposition in his own half time and again.

Paul Pogba 6 – Went off five minutes before half-time with an apparent muscle injury. Had completed most of his passes before then without creating anything.

Bruno Fernandes 8 – A superb goal at the end of the first half to make it 2-0. Otherwise Bruno Fernandes didn’t have his shooting boots on tonight, but created a number of chances for teammates.

Mason Greenwood 8 – Really troubled Lucas Digne and somewhat unlucky not to get among the goals down the right wing.

Axel Tuanzebe (stoppage time) N/A – Came on in stoppage time to help Manchester United see out a 3-2 win but got booked and saw his side drop two points.