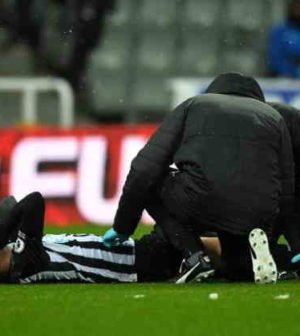 Newcastle United’s Fabian Schar is set to be “out for a few months” following a knee injury picked up during Saturday’s 3-2 win over Southampton.

The centre-back was stretchered off late on in what the club have reported to be a torn knee ligament.

Schar took to Twitter to announce he will be out for a few months with an injury that is “difficult to accept”:

The Switzerland international is hoping to return in time for Euro 2021, scheduled for the summer. He has 58 caps for the national team to date, scoring eight goals.

Newcastle United finished Saturday’s 3-2 victory with nine men following the defender’s injury, after Jeff Hendrick had been sent off five minutes into the second half.

The three points for Steve Bruce’s side were invaluable, giving them a 10 point lead over the relegation zone with 15 games to go.

Fabian Schar had started 13 of their 23 Premier League games so far this season. He has been a good contributor to the team despite the Magpies’ shaking defensive record during his time at the club.

The 29-year-old arrived from Deportivo La Coruna in the summer of 2018.