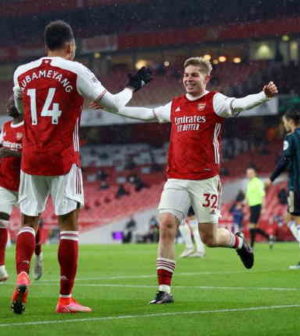 Arsenal are over in Greece this evening to face Benfica in the second leg of their UEFA Europa League Round of 32 tie.

Their ‘home’ tie will be played at Olympiacos’ Karaiskakis Stadium because of Covid-19 restrictions. The two teams played out a 1-1 draw over in Rome last week.

The Gunners are our clear favourites to progress from this tie this evening as the defending Portuguese champions have been woeful since the turn of the year.

The two teams for the Europa League tie are confirmed as:

Mikel Arteta has gone with his strongest lineup despite a key trip to Leicester City in the Premier League on Sunday.

Benfica have been through a number of goalkeepers since selling Ederson to Manchester City. Helton Leite starts this evening and is protected by former Premier League duo Nicolas Otamendi and Jan Vertonghen in defence.

Former Queens Park Rangers playmaker Adel Taarabt starts in midfield, whilst Pizzi and Rafa Silva are the goalscorers in this team.