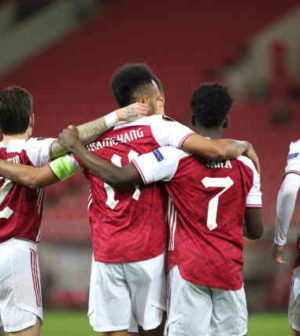 Arsenal came from behind to narrowly beat Portuguese champions Benfica 3-2 and progress to the Round of 16 in this season’s UEFA Europa League.

The Gunners’ ‘home’ leg was played at Olympiacos’ Karaiskakis Stadium in Greece this evening because of Covid-19 restriction. The two sides had played out a 1-1 draw last week over in Rome.

Mikel Arteta’s side had been heavy favourites to progress heading into the tie but made hard work of it.

This despite going 1-0 ahead midway through the first half thanks to a delicate chip over the goalkeeper from Pierre-Emerick Aubameyang after the striker had been played in by Bukayo Saka.

Arsenal had named arguably the strongest lineup available to the boss, facing a team that have barely won a game domestically since the start of the year.

They failed to hold their lead until half-time as Benfica equalised through a cracking free kick from Diogo Goncalves in the 43rd minute.

Jorge Jesus’ side then took a surprise lead on the hour when Dani Ceballos bizarrely played Rafa Silva in one-on-one with Bernd Leno, to which the Portuguese duly converted.

The visitors’ lead didn’t last for long though as Kieran Tierney scored a fine solo goal with an effort across Helton’s goal into the far corner having been setup by substitute Willian.

An away goals victory was on the cards for Benfica until Aubemayng scored his second goal with a close range header three minutes from time.