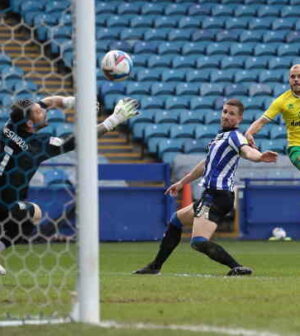 Norwich City have moved 10 points clear at the top of the Championship following their 2-1 come-from-behind win at Sheffield Wednesday on Sunday afternoon.

Daniel Farke is looking to take the Canaries back into the Premier League at the first attempt following last season’s relegation.

It was 23rd place Sheffield Wednesday who opened the scoring on 7 minutes though, through ex-Norwich striker Jordan Rhodes. The Scotland international scored from close range after a direct free kick and rebound were both blocked, eventually falling into Rhodes’ path six yards out.

The Owls, seven points from safety, held onto the one goal lead at the break.

Norwich stepped up their game in the second half and found their equaliser on the hour as Oliver Skipp set up Teemu Pukki, who fired into the far corner to make it 1-1.

The East Anglia club were widely expected to return to the Premier League this season after keeping hold of a number of their stars, including Pukki, Todd Cantwell, Tim Krul, Max Aarons and Emi Buendia.

With 10 games to go they are now 10 points ahead of both Watford in second, and Swansea City in third, though the latter have a game in hand.

Their lead at Hillsborough came courtesy of Todd Cantwell with a fine left-footed finish, setup by Buendia.

Things are starting to look bleak for Darren Moore and Sheffield Wednesday, though they can be encouraged by the woeful form of Rotherham, Birmingham City and Derby County above them.