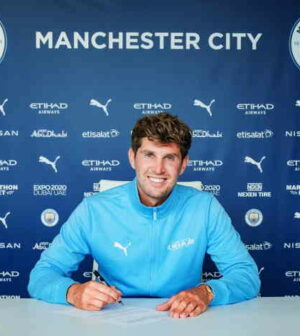 The 27-year-old is now under contract at the Etihad Stadium until the summer of 2026.

Stones originally arrived in a £47.5 million move from Everton, which surprised many football fans at the time.

The centre-back struggled with inconsistent performances before forming a solid partnership with Ruben Dias as Manchester City ran away with the Premier League title last season.

Stones went on to play in both the Champions League and Euro 2020 finals this past summer, though was on the losing side on both occasions.

He has made 168 appearances in all competitions for City over the past five years, winning the Premier League (3 times), FA Cup (1) and EFL Cup (2).

Manchester City saw highly-rated young centre-back Eric Garcia depart on a free transfer this past summer, leaving Aymeric Laporte and Nathan Ake to compete with Stones and Dias for the starting positions in Pep Guardiola’s side.

The Citizens were beaten by Leicester City in the FA Community Shield this past weekend and kick off their Premier League title defence away to Tottenham Hotspur on Sunday, 15 August 2021.