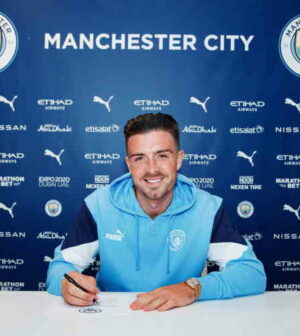 Premier League champions have completed the signing of Jack Grealish in a British transfer record £100 million deal from Aston Villa.

The midfielder has signed a six-year deal at the Etihad Stadium and has been handed the number 10 shirt in place of the departed Sergio Aguero.

Grealish has been one of the most consistent players in the Premier League over the past two seasons, following his huge influence in the Villans promotion back to the top flight in 2019.

The England international gives manager Pep Guardiola another playmaker and goalscorer in midfield, who can play both centrally and on the left of a front three.

The 25-year-old will be competing with the likes of Kevin De Bruyne, Raheem Sterling, Phil Foden, Bernardo Silva, Ilkay Gundogan, Riyad Mahrez and Ferran Torres for game time in Manchester.

The defending champions begin their 2021-22 Premier League campaign on Sunday 15 August away to Tottenham Hotspur.