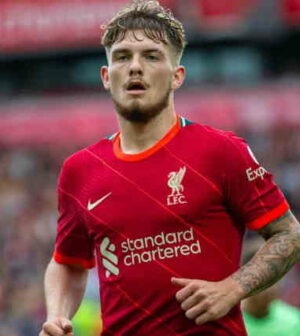 Liverpool teenage star Harvey Elliott could be out for the remainder of the 2021-22 season following a severe injury at Elland Road this afternoon.

The 18-year old made a third successive start Jurgen Klopp’s side this afternoon, playing alongside Fabinho and Thiago Alcantara in a midfield three.

Elliott had been having a quiet game and was understood to be set to be replaced by Jordan Henderson when the ball next went out of play. Unfortunately for the youngster it didn’t happen soon enough.

Leeds United substitute Pascal Struijk made the unfortunate challenge, which didn’t look like a foul in real time and referee allowed play to go on momentarily.

Nearby Mohamed Salah alerted the touchline to the severity of the challenge as medics quickly entered the field to deal with the Liverpool midfielder.

Sky Sports did not show a replay of the incident, with co-commentator Gary Neville describing the result of the challenge but stating he did not feel it was a red card offence.

VAR decided otherwise and Struijk was sent off on the hour mark.

Prior to the incident, Liverpool had a 2-0 lead through goals from Salah and Fabinho in either half.

CSAR sends out our best wishes to Harvey Elliott.